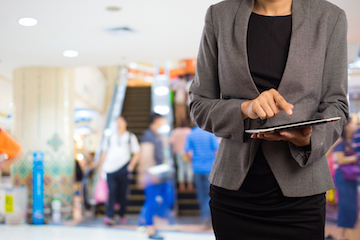 In retail, it’s easy to react, especially in the rush of the moment or the chaos of a busy floor. But this often has the opposite effect of what’s intended. Reactive statements like “That’s not possible” or “You’re blowing this out of proportion” land with judgment. In return, they often lead to quick, defensive remarks that only serve to escalate emotions.

In other cases, retail managers want others to feel better and less stressed, so they’ll blurt out a reflexive “I understand, but…” statement. What comes through is a lack of interest, empathy, and sincerity.

When you’re tempted to react, pause instead and try this 3-step micro-strategy:

It’s virtually impossible to do the first two actions without putting your own feelings on hold and thinking 100 percent about the other person. And it takes only a moment of intention. It also provides the side benefit of helping you remain centered and relaxed.

It’s particularly important to pause and listen when you’re interacting over the phone. Without the benefit of facial expressions and other non-verbals, you have to be cued into more subtle behaviors and clues, like:

As you respond, don’t get bogged down with your exact wording. Instead, focus on the intent of your statement and the results you expect from listening at that point in the conversation. The power of listening to learn doesn’t come from being accurate; it comes from being sincere.

Don’t allow yourself to be led around by the chaos. Take the initiative to be intentional, listen, and hit that pause button.

View all posts by Michael Patrick →